The Aboriginal Health Council of SA (AHCSA) is a membership-based peak body with a leadership, watchdog, advocacy and sector support role, and a commitment to Aboriginal self-determination. It is the health voice for Aboriginal peoples across South Australia representing the expertise, needs and aspirations of Aboriginal communities at both state and national levels based on a holistic perspective of health.

As the peak body for Aboriginal health AHCSA receives funding from various sources such as the South Australian and Australian governments, universities and other key partners to ensure the delivery of programs for the Sector. 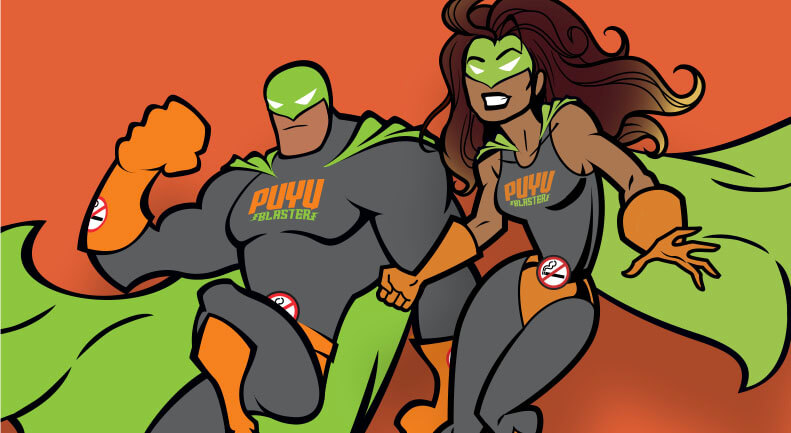 In 2014, the AHCSA Tackling Smoking and Healthy Lifestyle (TS&HL) team launched their Puyu Blaster campaign throughout the Yorke and Eyre Peninsulas. The campaign is based on a superhero character, the Puyu Blaster, who combats tobacco use by encouraging and supporting community groups and individuals with smoking prevention and cessation messages.

The Puyu Blaster campaign was developed through the TS&HL team’s community consultations. The Puyu Blaster superhero has been brought to life through the development of a costume, worn at events by TS&HL Project Officer Trent Wingard. The superhero particularly appeals to younger members of the community and reinforces non-smoking healthy lifestyle messages.

Over the next two years, the AHCSA Tackling Smoking team has focused on developing this initiative, with phase two of the Puyu Blaster campaign developing school-age educational programs and community education sessions.

From 2016 the AHCSA Puyu Blasters have focused the scope and reach of the programme and are concentrating upon reducing tobacco usage and its effects, consistent with the direction of the national Tackling Indigenous smoking initiative.

Rather than focusing solely on the Puyu blaster character, the team recognised that there are many heroes in the community and we all have the opportunity to be Puyu Blasters for our mob.

The AHCSA Puyu Blasters Team consists of project officers based in Adelaide, but who work across our funded region and project officer based in a number of AHCSA Member Services. These include, for various periods:

The Team will work together with the regional project officers to deliver community education and  consultation, workforce support and capacity building, programs focusing on youth in schools and other programs, and working in partnership with other organisations to meet the aims of the programme:

This website provide information, links and options for contacting various support services available in the community’s fight against tobacco and its effects.

PB is funded under the Tackling Indigenous Smoking program from the Commonwealth Department of Health.