In 2010 the Aboriginal Health Council of South Australia (AHCSA) was funded to design and implement the Maternal Health Tackling Smoking (MHTS) program aimed at reducing the prevalence of smoking among pregnant Aboriginal women and their families in South Australia (SA). Ensuring that Aboriginal Children are born healthy is paramount to improving Aboriginal health and is pivotal to Closing the Gap between Indigenous and non-Indigenous health.

The statewide MHTS program focuses support to pregnant Aboriginal women, and their families within the Aboriginal Community Controlled Health sector and supports all regions in South Australia. The program is funded through Drug and Alcohol Services South Australia and is part of an overarching Tackling Smoking project, under the National Partnership Agreement on Closing the Gap in Indigenous Health Outcomes. Although there have been positive results in SA reducing the rates of Aboriginal women smoking during pregnancy much work is still required. The SA Tobacco Control strategy 2017-2020 has set a target to further reduce smoking during pregnancy among Aboriginal women to 35% by 2020.

The MHTS program has celebrated many successes over the past nine years, the most important being a reduction of smoking rates during pregnancy for Aboriginal women in SA. On average, 1,000 Aboriginal babies are born in SA every year. In 2010, when the program commenced, 52.9% of pregnant women were smokers. In 2017 smoking rates had decreased to 41.3 %. The increased number of Aboriginal women making successful quit attempts during pregnancy has been attributed by the effective and popular ‘Stickin it Up the Smokes’ social marketing campaign which continues to encourage women to make quit attempts by delivering smoke-free messages engaging with local ambassadors/role models.

The MHTS program facilitates education on the health risks associated with smoking during pregnancy and support for women to make quit attempts which contributes to reducing smoking rates among pregnant women. The MHTS program encourages the early presentation of pregnant women to healthcare providers with ongoing antenatal care, promoting the importance of having smoke-free babies born to smoke-free mothers in smoke-free environments. The Smokerlyzer monitor is used regularly at the pamper days and community events to engage women who are pregnant on the risks of smoking. The Smokerlyzer monitors how much Carbon Monoxide caused by smoking is in the pregnant mother and her unborn baby’s blood.

After a successful nine-years and over 100 events, pamper days continue to be a positive motivator. These Pamper Days allow women to indulge in beauty therapies, hairdressing, yoga, mindfulness, massage and photo shoots with healthy lunches provided. Pamper Days also include messages and education from the MHTS program about the risks associated with smoking during pregnancy, smoking around babies and children, and support services available to help women make quit attempts. Women who attend the Pamper Days in a relaxed atmosphere feel supported by the MHTS program and are often keen to make quit attempts after being educated about the risks of smoking to mother and baby during pregnancy.

2011 ‘Stickin it Up the Smokes, black proud smoke-free Sistas’ (SIUTS)

In 2011, the Aboriginal Health Council of South Australia (AHCSA) launched its MHTS ‘Stickin It up the Smokes black proud smoke-free Sistas’ social marketing campaign. The campaign has encouraged pregnant Aboriginal women to stop smoking during pregnancy – giving their unborn babies the best start to life. The campaign utilised nine local promotional ambassadors from various regions in South Australia (SA) all with their unique stories to successful smoke-free pregnancies.

The campaign includes a Facebook “Stickin It Up The Smokes” page. Women are invited to share their own smoke-free pregnancy stories as a way to support each other. Followers can keep up to date with the MHTS program activities and events. Pamper days and education on the importance of smoke-free pregnancies are promoted and celebrated on Facebook.

To complement the campaign, the ‘Bump to Bub – how your baby grows’ booklet was developed to provide a community resource about the growth and development of the unborn baby during pregnancy. Each month a different ambassador was featured in the booklet sharing their personal smoke-free pregnancy story.

The ‘Bump to bub – how your baby grows’ resource has also been developed into a desktop flip chart for maternal health and allied health professionals. It can be used while engaging with pregnant Aboriginal women on the risks of smoking during pregnancy as well as providing information to support making quit attempts. 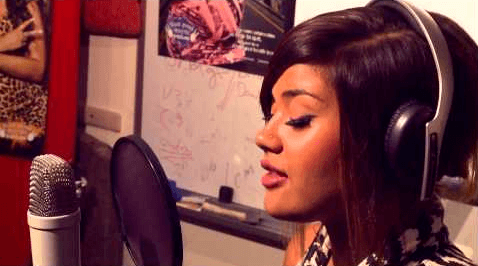 A Smoke-free pregnancy rap song was developed in 2012 by Ellie Lovegrove and Daniel Sumner students from Centre for Aboriginal Studies in Music Adelaide University. The song has been featured in radio advertisements in 2012 and in the recent Smokerlyzer monitor training videos developed by AHCSA.

The MHTS program was proud to launch Phase Two of the ‘Stickin It Up the Smokes’ campaign in April 2019. The new campaign featured the children of two of the original SIUTS Ambassadors, Josselyn Cleaver and Renee Andrew (nee Coulthard) – who were pregnant during the first SIUTS Campaign in 2011.
The ‘Through the eyes of children,’ campaign revitalises the SIUTS campaign, telling the next chapter of the story, demonstrating healthy, strong babies/children are the result of a smoke-free pregnancy.

The ambassador posters for the ‘Through the eyes of children’ deliver strong and clear messages about the importance of smoke-free pregnancies. Tag lines include ‘Because Mum gave up smokes for me. I love to run and I love my mum’ and ‘Mum and Dad gave up smokes for me, and I breathe easy.’

Health risks to pregnant women who smoke and their unborn babies

Smoking during pregnancy can have lifelong damaging effects on the unborn baby. These include:

For further information about the above smoking risks during pregnancy and others refer to the resources section of the website.

Risks of second and third-hand smoke

It is not only unborn babies who are affected by cigarette smoke but newborns and children too. Every time that you, your partner, family, friends and community members smoke around your children, your children are smoking as well. Second-hand smoke, which is also sometimes known as passive smoking, is the smoke that is blown out your mouth while smoking as well as the smoke that comes off the end of the cigarette.

Third-hand smoke refers to the poisons that remain from cigarettes after you have been smoking which stick on all surfaces including your hands, clothes, inside your car and home (curtains, furniture, carpets, walls and ceilings).

Second and third-hand smoke can cause many health issues in babies and children including:

There are many things that pregnant women can do to protect themselves and their babies from second and third-hand smoke. These include:

For the benefit of babies, it is advised that breastfeeding mothers do not smoke as the nicotine and other harmful chemicals can be passed to the baby through breast milk. It is encouraged that women continue to breastfeed wherever possible even if they are smokers to boost their baby’s immunity and protect them against illness. If women are unable to quit, they should breastfeed before they have a cigarette to reduce the amount of nicotine passed to the babies through the milk. The longer time there is between a cigarette and a baby’s feed, the better.

Ways to quit smoking during pregnancy:

Tips to beat the cravings.

If you quit smoking when you are pregnant, the good news is your health, and the health of your unborn baby will improve quickly!

Being a non-smoker also means that you are going to look younger, fewer wrinkles, and you won’t smell of cigarettes anymore. You are a good role model for other members of your family and community making you, your family and children proud.

For further information regards the Maternal Health Tackling Smoking program or content in this website please contact the MHTS project officer at the Aboriginal Health Council on (08) 8273 7200.

Information can also be found in the resources section of this website.